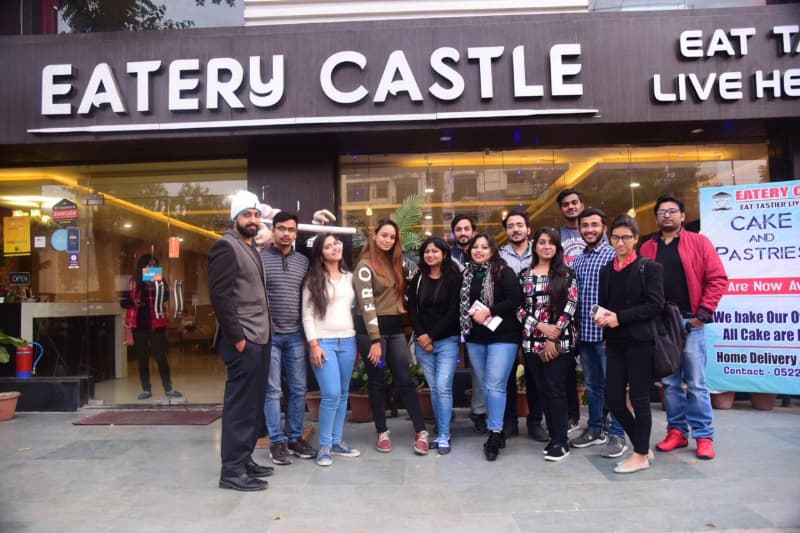 When I started LucknowTips back in 2016, it was because I was giving myself the opportunity to explore my own City. The city I have been living in for the last 7 years.

My work demands to be in front of the computer for the longest time, which has kind of prevented me in exploring the city, so why not create a part of your work, which requires you to step out of your cosy home office and explore the city.

So far I have covered a few places in Lucknow, I have done a few videos on the YouTube channel which are also embedded on the blog as well.

The idea behind LucknowTips is to explore the city in any way we can, so when I got the invitation to attend a Blogger’s table at eatery Castle restaurant, I have readily agreed. Because… Content!

What is BLogger’s Table? It’s an event where Food Bloggers are invited for tasting the best food items and giving feedback to the owners/chefs.

The Eatery Castle Restaurant is located just at the Munshi Pulia Chauraha, and I think it is one of the few restaurants that I did not have to ask for the location because it was right there.

As I have already mentioned that the location is pretty approachable, let’s talk about the Ambience.

It was a Saturday afternoon and weekends are usually crowded for all the restaurants, surprisingly the Eatery Castle was not that crowded at that time, maybe it was because of the special arrangement for the Blogger’s Table.

And even if it wasn’t exclusively open for the Blogger’s table, the restaurant has a good amount of space and enough tables to entertain the guests even on a Saturday afternoon.

The best part of the restaurant for me was the huge glass Windows at the entrance that lets you peek out at the busy Munshi Pulia Chauraha, and it does not isolate you by disguising itself has a secret getaway from the crowd.

For those who don’t know, People Watching is a thing, especially for those who happen to spend most of their time in a closed environment. I personally love watching people whenever I am out, so I loved the location of the Eatery Castle restaurant, their Ambience at the choice of their furniture.

Also, the food for Blogger’s table was already selected we just had to taste it. I took a little peek into the menu of what is all that is available, it is just like a standard restaurant and mostly all the common things are available here.

Our food tasting session started with spicy corn which is a starter from there veg section. They also have got non veg starters which reached me a little later since everyone was busy taking photographs.

I wouldn’t say I had it for the first time, it is basically on mostly all the menus of different restaurants in any City, but I can say that it was good.

The non-veg starter was Drums of Heaven which is commonly known as a Chicken Lollipop, but I am OK with calling it Drums of Heaven since it was really heavenly in the taste, I still can’t forget the crunchiness of that crispy chicken lollipop.

After all the food bloggers were done with their photographs and tasting it, few other items made their way to our table, I checked out their Kebab Platter which had different types of kebabs, including Chicken seekh kebab, Chicken tikka, Fish tikka, Tandoori chicken, Murg malai tikka (Priced at Rs 355)

There was a veg platter as well, but honestly I wasn’t inteested, :-).  In veg platter, it was Afgani paneer tikka, Babycorn tikka, Hara bhara kebab, Pineapple tikka, Paneer tikka.

And there was some Dosa in between… 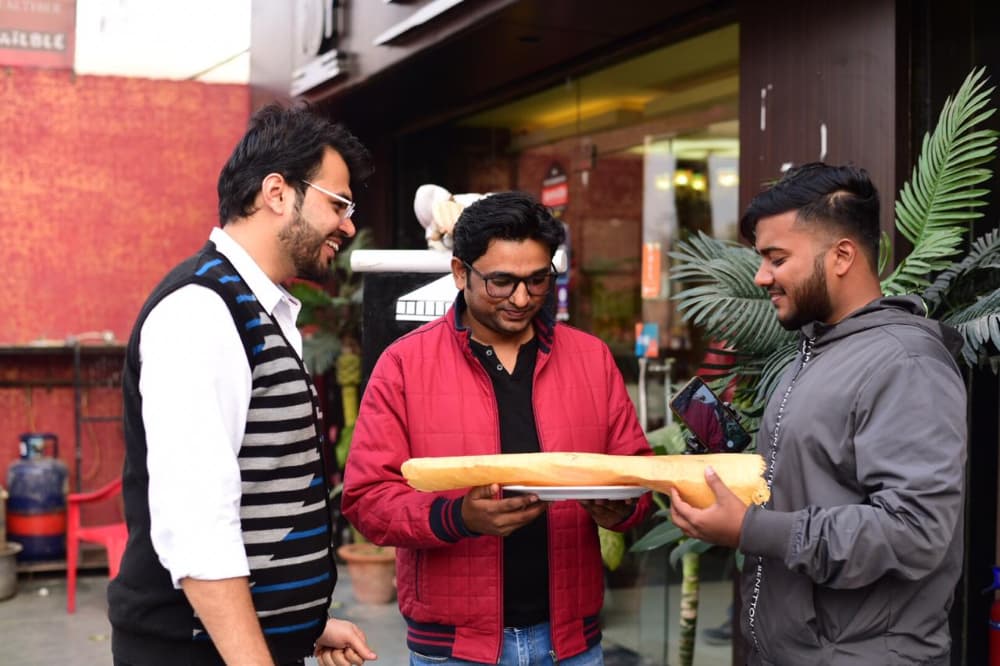 I did not actually taste the Dosa, (for me, Chicken > Dosa), but I still got the photo op with the giant Dosa.

For the main course

There were items both from veg and non veg section and being a non-vegetarian, I inclined towards the non veg more. Their signature dish called Patiala Chicken, which is cook with a thick gravy and then prepared in three layers including eggs and spinach gravy.

Just when I thought that the Patiala Chicken  is their best recipe they have on the menu, they started serving the Dhaba Chicken, which was equally impressive.

I also tasted some veg items, such as Dal Makhani and Paneer on the request of a fellow blogger, but honestly I can’t talk about that after having delicious non veg food.

Veg food has its own place and I would prefer having it if non veg is not available, but for me, the Patiala chicken and the Dhaba chicken just stole the show.

All the chicken and its gravy went well with the Naan, although there were different type of Rotis available.

Since, I am not really a food blogger, I know that I am not able to put all the deliciousness that I experienced in words, I created a video that is going to visually tell you how my experience was at the eatery castle bloggers table.

I can easily recommend the restaurant for people who are looking for a good and easily approachable place to have a good meal and spend quality time with your friends and family.

The Staff of eatery Castle

Since it was a Blogger’s table I didn’t actually interact with staff, the owner. Mr Taalib was available and he was politely ordering his staff to offer their services and it did feel like it is not going to be a nightmare if  I had to communicate with them directly.

I am really hoping and that I continue exploring different parts of Lucknow including the restaurants and other eating outlets so that I can write my experience on the website for others to find value when it. 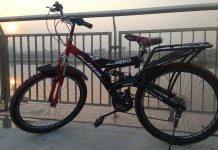